Time flies when you are having fun. I thought I'd have the harp almost done by now- but life interfered and not much progress has been made. The new garden fencing is done, and the new pergola too, so now I can get back to harp making.
Here are some progress photos taken on and off over the past month: 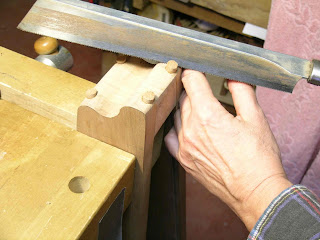 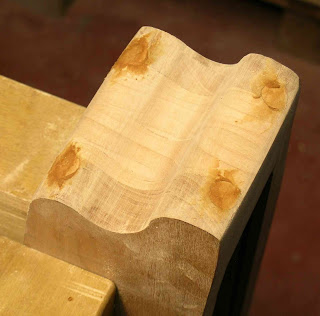 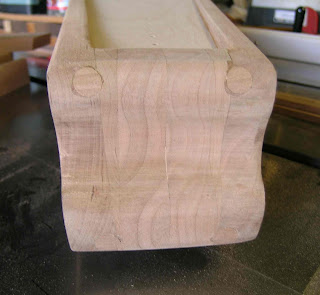 I cut some plugs from the cherry and used them to fill the messy holes in the top of the harp. I thought that round, filled, holes would look better than the grooves, but the tear out from the drill bit in the end grain was disastrous. Filled and sanded they were not too bad- but I should have just filled the slots with pieces of thin wood. . . would have looked better. 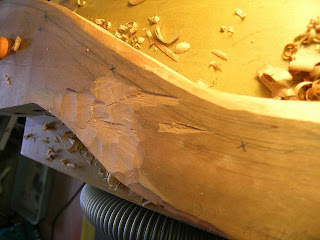 The next disaster was finding that the wood in the neck was damaged on the inside, and I thought I could carve away the bad splits- but they went deeper than I thought they would. What a mess! 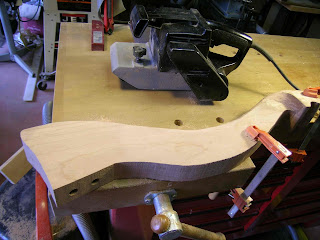 So, I dug out the ancient and seldom used portable belt sander and put a very coarse belt on it and sanded away the mess. Lost about 1/4" of the thickness. Good thing it was too thick to begin with. Now it is just about right. Here I'm hand carving the shape of the pillar. I don't want to have a router-generated profile, but a graceful shape that is not and could not be machine generated. 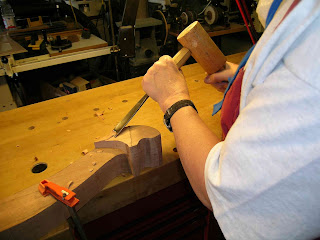 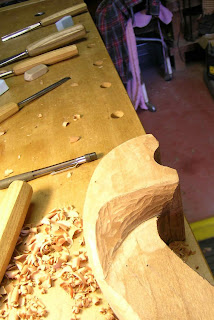 The shoulder/knuckle is an important design element, and I want this to look really graceful. I'm taking off little bits at a time and sneaking up on the shape in my mind. 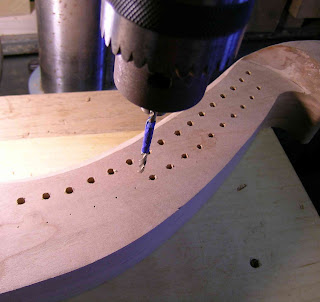 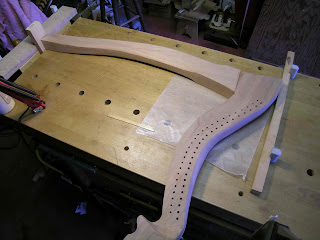 Once the holes were drilled and the shaping complete I could join the pillar and neck. This was a bit nerve wracking since it was so important that they fit with the body- but I checked a dozen times, so I think it will be OK.

The soundboard was drilled for the strings and the back was cut out for access to the interior, and to let the sound out; and then they were glued to the soundbox. Still some trim work top and bottom of front and back, and finish shaping to do on the base. 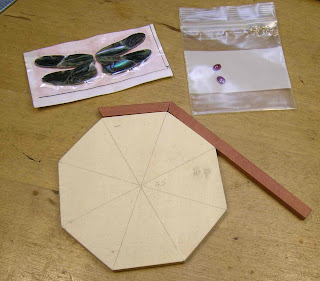 Once that is all done I can focus on the dragonfly inlay. I have the mother of pearl wings and ruby eyes ready to go on the holly octagon with the pink ivory frame. This will all take a while, but bit by bit it will get done. Then it will be inlaid into the side of the neck above the pillar. It should look pretty good.
Posted by Donna Menke at 12:17 PM No comments: